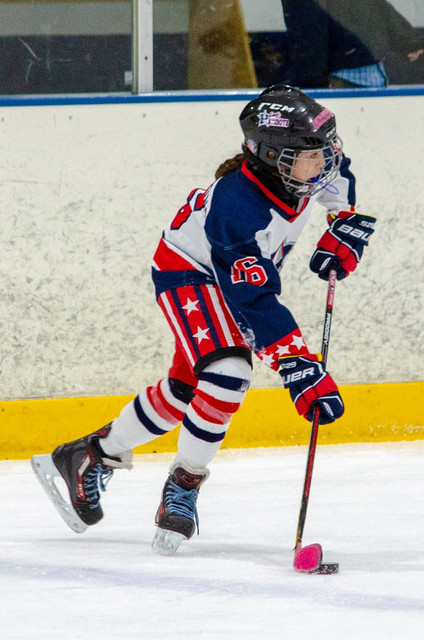 We challenge our upcoming Lady Patriots this off season to complete the Hockey Shot 10,000 Puck Challenge!

By August 31st, we hope to see every Patriot record 10,000 shots to develop their goal scoring for the upcoming season. Challenge yourself and get to 10,000!

Players should register online by their birthyear:

For back to back seasons the U12AA proved to be a force under the supervision of head coach/director of hockey ops Lauren Patterson and defensive coach Nick Boyce. New to last season's coaching staff was SJU all time leading goal scorer Erin Dougherty and former pro / Penn State star alumni Mike Pietrangelo.

The team went an outstanding 33-11-7 for their overall record, broke the top 20 for back to back years in the USA myHockey rankings, earned the MAWHA finalist banner in back to back seasons, and featured tons of memorable moments. The girls played two games at Penn State University, earned two championships in boys tournaments at Grundy and Bryn Athyn, and one for girls in Adirondack. It was the year of offensive firepower with 8 forwards registering over 20 points each! The d core of captain J.Gamburg, T.Lash, G.Murphy and J.Fowler provided lots of offensive support registering goals and assists from the blue line. The goaltending from B.Kaess and A.Edmonds was the best goalie combo in the league registering over 8 shutouts each!

At the Grundy tournament - The U12AA girls lost their first game in a tough battle with Snider boys but bounced back in dominating fashion against South Maryland Sabers to win 7-0. The girls then put on a performance against the Jr Blue Hens defeating the boys 4-0. The win secured them for a rematch against Snider in the championship game. J.Hirsh scored 2 goals and A.Edmonds posted a 21 save shutout to give the Patriots the 2-0 win and gold in their first tournament of the season. Edmonds earned the club's first ever 'Patriot Performance of the Weekend' for her stellar play as both in net and as a forward!

At Bryn Athyn the U12AA entered as the only all girls peewee team in the 8th Annual Bryn Athyn Winter Classic. The team secured a 5-0 victory against the home team! J.Gamburg started off the scoring for the Patriots, B.Murphy added two goals and J.Hirsh/J.Kaminsky each registered their own goal. The team put up 38 shots on Bryn Athyn and B.Kaess registered her 5th shutout of the season.
U12AA won their second game at Bryn Athyn against the DE Rough Riders in a dominating 4-0 team win. In an outstanding overall team effort, M.Murphy, J.Hirsh, B.Murphy, and L.Picker each registered a goal with J.Kaminsky and B.Murphy earning assists as well. A.Edmonds earned her 5th shutout in the team win.

The team followed up with a win against the Wissahickon Warriors to secure their place in the championship game. Goals from G.Pietrangelo(2), M.Unger(2), B.Murphy(2), J.Hirsh, M.Murphy and J.Gamburg. B.Kaess earned her 6th shutout in the win.

The 12AA continued showing dominance winning gold against the Delaware Rough Riders 6-1. Goals from B.Murphy(2), T.Lash, J.Gamburg, L.Picker, and J.Kaminsky. B.Kaess came up with some huge saves to backstop the team to the championship win.
The team made history as the first girls team to enter the tournament, let alone win as an all girls team!

In the skills competition at Adirondack Northstars Winter Classic XXVI, T.Lash and S.Saldutti skated away with 1st place in the fastest skater, A.Edmonds came in 2nd for goaltending and B.Murphy came in 3rd for stick handling, In game 1, the Patriots fell short in the 3rd period against the Long Island Lady Islanders 2-1 despite a tremendous effort in net by B.Kaess and goal from J.Gamburg.

The team finished round robin play against the NJ Colonials who could not break through the stellar defensive core and amazing backchecking effort by the forwards. B.Murphy registered a hat trick, with A.Edmonds, G.Pietrangelo, and S.Saldutti each registering a goal while B.Kaess registered a shutout.

The two wins secured the team for a rematch in the championship against the Lady Islanders which started off with Gamburg scoring 2 goals. The back and forth game lead to a close battle with J.Kaminsky scoring what would be the game winning goal in the 3-2 game. A.Edmonds was solid in net backstopping the team to gold!

In the MAWHA playoffs, our second overall seeded team defeated the Long Island Lady Islanders in an outstanding hard fought team game 2-1 B.Murphy and J.Hirsh each registered a goal and an assist to lift the team to the win. Every Patriot player worked together to produce a lot of offensive chances, but it was a battle of goaltending with our very own A.Edmonds earning the victory to get the girls into the championship game.

The girls faced off against a talented Jr Flyers team who they have battled hard against all season. The Patriots fell behind 3-0 after the first period, but the girls continued to battle each shift. J.Gamburg got the team on the board with a blast on a rush. B.Murphy rushed up the ice on a 2 on 1 with J.Mull, where a perfect pass onto Mull’s stick for an amazing backhand goal brought the lifted the team back into the game. J.Kaminksy’s patient puck handling around the net lifted the team with another goal in the second period to make it a 4-3 game. The Jr Flyers scored early in the 3rd on a powerplay, but J.Hirsh put the girls back within one on a snipe for the Patriots 4th goal. The girls fought to the very end thanks to outstanding goaltending from B.Kaess who earned MVP honors for the Patriots.

Though the girls fell short 5-4, the team almost performed a comeback of the ages in the MAWHA championship.

Coach Lauren, Nick, and Erin return again for the upcoming season to oversee our U12AA for another memorable season adding in coach Nick Kaminsky to their all star coaching staff.